Are Resistance Bands Better than Cables ?

Anyone who’s stepped foot in a gym knows that they contain a huge variety of equipment, possibly enough to be intimidating. Resistance Bands and Cables have their place in amongst all of this

Whether it’s the squat racks surrounded by metal weight plates or machines on which you wouldn’t even know how to sit, it’s easy to become confused and alienated by the huge variety of equipment provided. As you begin and continue to train, however, there’ll be certain pieces of equipment you gravitate to as you begin to realise their importance. Dumbbells and barbells, of course, are a common choice because they offer a variety of different weights, and can be used for lots of different exercises: in addition to this, they look simple enough to use. Pick them up, do something with them, and put them back down. Aside from the free weights, there’s one piece of equipment in a gym that I’d argue is more important than any other: the cables.

Cables offer a distinct advantage that free weights don’t: when using free weights, the resistance you feel is caused by the force of gravity pulling the weight down to earth, which means there is only one possible direction you can feel resistance: downwards. Think about all the exercises you perform with free weights: biceps curls, bench press, squats, among many more. Every single one of them relies upon the idea of you moving the weight away from the earth. Cables don’t have this limitation: due to their nature, they can be used in different planes of movement, which allows for performance of exercises where you are moving in a different direction than purely away from the earth, like a triceps pushdown or a chest fly. Resistance bands for the work from home workout

Therefore, when gyms shut down and people were forced to work out at home using mostly bodyweight and potentially the few free weights they had available, adaptation of these movements became very difficult, if not impossible. That was, until, resistance bands began to crop up. They existed before, but since lockdown began, they seem to have had a revival.

For about 2 weeks, my Instagram feed was plastered with adverts for resistance bands claiming they could give you as good a workout as you’d have at a gym. A difficult claim to make, I thought. Sure, by attaching a band to an anchor point, for example a door hinge, you’re no longer limited by gravity and can exercise in different planes of movement, but can they really offer the same effectiveness as cables?

The traditional cable machine certainly has its advantages.

Firstly, it has a bigger range of resistances (weights) and changing the weight is usually simply a matter of taking the weight selector pin out the weight stack, and sliding it in somewhere else. The weights at most cable machines in gyms go up in increments of 2.5kg, which means people using them can gradually increase resistance to make sure the weight they lift is going up over time and they are getting stronger. Some exercises for which cables are used, such as a lat pulldown or a row movement, often require a heavier weight than other exercises to perform properly, and it’d be difficult for a resistance band to provide this kind of resistance, whereas cable machines offer resistance up to 100kg – perhaps unlikely to be used, but the option – and everything in between – is there.

Cables also provide variety in grip types. While some resistance bands have loops on which you can clip different grips (e.g. a V-grip, a straight grip, or a simple handle), often they are just elastic bands: see the images below to compare. 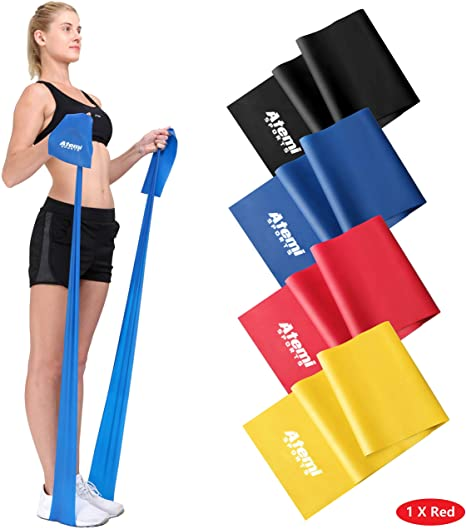 Cables also have the advantage of offering a more free and unobstructed range of movement than resistance bands. Take, for example, the chest fly, which requires the user to move their hands from an outstretched position, to next to each other in front of the torso (see below). There’s no problem with this movement with a traditional cable machine, however with a resistance band, due to the fact there’s a single pivot point behind you, the band is likely to touch your shoulders as you bring it out in front of you, which obstructs the movement therefore limiting its effectiveness, and could cause discomfort, particularly as resistance bands are usually made of rubber which causes a high amount of friction against the skin. It’s slightly difficult to put into words so the images should explain it a bit better. The evidence may seem stacked against resistance bands, but they do carry certain advantages.

They’re far cheaper than cable machines, and much more convenient. A set of decent resistance bands wouldn’t even set you back £20, whereas the very minimum a cable machine is going to cost is hundreds of pounds. Even if you were willing to splash out, you’d still need the space to put a large, heavy, probably ugly-looking apparatus, whereas cables are easy to pack away and can also be taken outdoors, for example to the park. Anchor points for cables are easy to find: for an exercise like a bicep curl, you merely step your foot down onto the band to provide resistance as you pull the ends up with your hands, and in other cases objects like trees or door hinges can be used as a pivot point for the band. It’s actually also quite easy to change resistance with resistance bands: it’s only a matter of buying more bands, or using multiple bands at the same time to obtain the resistance provided by both bands for a single movement.

Bio mechanically bands also have one big advantage against cables: linear variable resistance. When you’re using cables, the weight is the same throughout the entire movement. I’ll use a chest fly as an example as it’s a relatively simple exercise. With a traditional cable machine – or indeed a dumbbell or a barbell – you are moving the same weight throughout the entire movement. If you set the weight stack to 10kg, no matter whether you are at the very start of the rep or at the end, the resistance you feel is always 10kg. No more, no less. This isn’t, however, the case with resistance bands. Think about a regular rubber band: the more you stretch it, the harder it becomes to stretch it any more, and the same principle applies to resistance bands. The advantage here is that resistance bands are able to mimic the natural strength curve of the muscle. The point at which your chest muscles are strongest in a chest fly is when they are most contracted, i.e. when your hands are together in front of your body at the end of the movement, and the weakest point is when they are outstretched at the beginning. The resistance band takes advantage of this concept, as the band is loosest at the beginning when your muscles are weakest, and tightest at the end of the movement when your muscles are strongest. Therefore at the point at which your muscles are strongest (the end of the movement), there is more resistance and they are being worked harder, while not risking injury at the weakest point as there is less resistance there. Basically in this example, as the movement progresses, you get stronger, and the resistance band takes advantage of this and resistance increases throughout the movement so you are being worked harder throughout. Traditional cables and free weights simply can’t offer this, as the resistance remains the same throughout the movement.

Overall, both cable machines and resistance bands have their advantages over the other.

Cables offer a greater variety of weight and the ability to perform heavy, unobstructed movements, but are only found in gyms and are large, expensive machines, whereas bands are cheap, portable, offer linear variable resistance, but can’t quite offer as great a variety of movements and weight as cables can.

However if you can’t make it to the gym, resistance bands will certainly do a more than adequate job of replacing most of the movements you’d usually perform with cables.

Ultimately, it’s a matter of personal preference. I enjoy using cables a lot, so when gyms reopen I’ll happily start using them again. But some people may appreciate the advantages of bands enough to choose them over cables forever, and as relatively similar sets of equipment which perform the same general function of providing the ability to perform movements in different planes of movement, both bands and cables do this job effectively and both will add important variation to your exercise program.